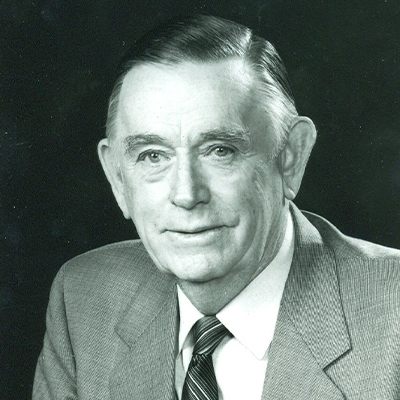 In 1919, Owen became the first member of the Redman family to be born in Coonawarra. The son of Redman founder Bill Redman, Owen married Edna in 1953, and together they had three sons: Bruce, Malcolm aka Mal  and Duncan.

A year after the outbreak of World War II, and just before he enlisted in the army, Owen completed his first vintage with his father. When he returned from service in the mid-1940s he received a soldier settlement block in Coonawarra and resumed working on the family property with his father.

In 1945, the Redman family owned 500 acres of grazing land, 40 acres of vines and 30 acres of orchard. The winery itself was still quite small, with just a few concrete open fermenting tanks, above ground concrete storage tanks and a couple of large barrels. The equipment was rudimentary and hand operated, and the power supply basic – a generator was used during vintage to run the presses and pumps.

In 1947, Owen was awarded the top prize at the Adelaide Wine Show. This greatly enhanced the reputation of the family winery and helped to establish Coonawarra as a wine growing region to be reckoned with. Following this, the Redman family were involved in major developments across the region. They entered joint venture agreements with Penfolds and Mildara, and their claret earned them considerable accolades.

When the original Redman property was purchased by Lindeman’s in 1965, Owen’s father Bill officially retired. In the same year, Owen and Edna decided to re-establish the family winery by purchasing a neighbouring vineyard owned by Arthur Hoffman.

Owen planted only red grapes on the property, believing red wine to be the future of Coonawarra (at the time, white wines were being made from varieties such as Pedro Ximénez, Palomino and Doradillo, which are more suited to fortified wines and sherry). And what a prescient move that was.

For the first three years, Owen used the production facilities at Brand’s Laira winery to make his wines (Eric Brand was Owen’s brother-in-law). Redman Wines – as we know it today – made its debut in 1968 with the release of the 1966 Redman Claret.

It was an exciting time in Coonawarra during the 1960s and 1970s. There was enormous growth in the region, and interest in wine was shifting from fortified to table wines. By the mid-1970s, the Redman vineyard had doubled in size to its current status with roughly 85 acres, plus five acres for the winery and machinery sheds.

During the 1970s and 1980s, Owen and Edna focused on building the name and reputation of Redman Wines. They were committed to growing their presence in the domestic market, and for fifteen years they travelled up and down the east coast of Australia hosting wine tastings, dinners and functions.

Owen continued making wine until his retirement in 1982, when his sons Bruce and Mal stepped up.

>Owen left a lasting legacy. He is remembered as a gentleman of Coonawarra who was loved and respected by all who knew him. The Redmans are ensuring the traditions of Owen’s wine-growing and winemaking practices will continue well into the future.