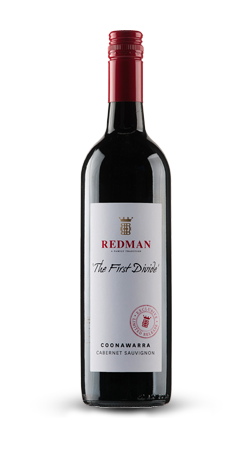 Dan Redman’s father in-law, 4th generation farmer David Abbey, has a twenty acre vineyard on his sheep and cattle grazing property in Coonawarra. This property was originally one of the first surveyed allotments purchased from the original settlers, subdivided and sold by the government for one guinea an acre to form the closer settlement, hence The First Divide.

The growing season was drier than average, and careful irrigation to optimise flavour development worked very well. Harvest was two weeks early, the result of a warmer than average October which advanced the whole season. There was a cooler finish with mild ripening conditions

The grapes were harvested in the first week in April. The grapes were mechanically harvested and crushed in the field. Initial fermentation was carried out in open fermenters and the cap was hand plunged twice a day. One third of the wine was run off into new French oak hogsheads, where fermentation was completed. The balance of the wine completed fermentation on skins, and was then transferred to barrels. The wine was bottled under screw cap, in February 2018, after eighteen months aging in French oak hogsheads.

Bouquet: Plenty of cassis with a hint of mint.

Palate: There’s a core of deep and brooding black fruit, thick tannin, dark chocolate and mint, and a strong and long finish.